Kayaking is not a crime, but...

Thames Valley Police has reported the suspected involvement of a recovered kayak in a number of burglaries near the River Kennet in Reading:

"Thames Valley Police is trying to trace the owner of a kayak that has been found abandoned on the River Kennet in Reading.

The boat was found by a member of the public yesterday (20/1).

Police believe that the boat may be stolen and that it may have been used to transport goods stolen in recent burglaries in the Waterloo Meadows area.

PC Jon Hare, from the Burglary Team at Reading police station, said: “I am keen to hear from anyone who thinks that this kayak belongs to them.

“I am also keen to hear from anyone who has seen a kayak being used in suspicious circumstances on the Kennet recently.”

Alternatively, if you do not want to speak to police, or leave your name, please contact the Crimestoppers charity on 0800 555 111."

The River Kennet is fully canalised where it runs alongside Waterloo Meadows and on past the back gardens of Elgar Road houses.  Despite its proximity to the A33, this is normally a very peacefully stretch of the waterway after travelling down from Fobney Island and before reaching County Weir.  There aren't too many inner city paddles where you can pass by places like this, which might explain the popularity of canoeing and kayaking with local residents. 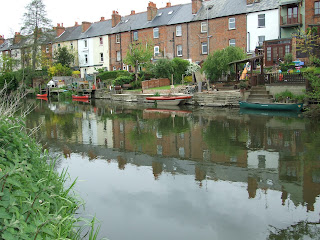 Just downstream of Waterloo Meadows, locals recognise the River Kennet as a great location for easy canoe and kayak paddling.
Posted by Atrebate at 20:19