As long ago as the start of this year, the River Kennet was demonstrating the limitations of its capacity to channel exceptional rainfall in the Valley.

River Kennet Flood Warning at the start of 2013 from Shoothill FloodAlerts.

The flood warnings of January may have now receded (although there are still current alerts for groundwater flooding in the Aldbourne and Lambourne Valleys in indication of the wider catchment's saturation), but whilst the Kennet is back within its typical range residual levels and seasonal floral dieback have provided the opportunity to explore some lesser paddled riverine Kennet backwaters.


My Facebook post on 15 Feb announcing "Bedtime now: 11 days in Singapore, Thailand and Malaysia starting tomorrow" received a response from Mal Grey that "I was just thinking I should get in touch if I paddle the K&A on Sunday as is looking likely!"  It was disappointing not to be able to join, but fortunately Mal took lots of photographs of a good day out.  His blog post of the trip from the Song Of The Paddle forum is, with kind permission, partially reproduced below.
"Now, finally, we get to the more adventurous part of the trip. On the way up, we'd seen that we could easily transfer to one of the branches of the natural River Kennet just downstream of Kintbury. The map also confirmed the existence of a river, but didn't confirm if the various bridges were passable or not. Not seemed likely, especially as the railway needed to be crossed and the tracks were about level with our noses. Still, it remained parallel to the canal, escape should be easy enough, so we quickly dropped into the fast flowing stream." 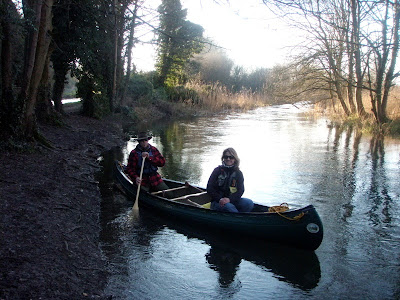 "Here a couple of chaps exclaimed, slightly grumpily, that we'd never get canoes down that, there were trees blocking the river, etc, etc. I was expecting to prove them right!

What followed was a delightful little branch of the Kennet, just wider than a canoe is long, with lots of little blockages, but no major ones. The flow was nice, but not dangerous, the water deep enough for a paddle but no more, and the saw only had to come out once." 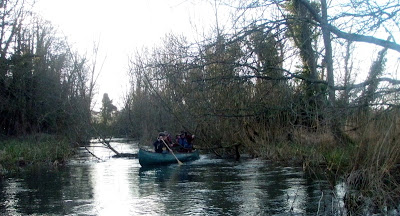 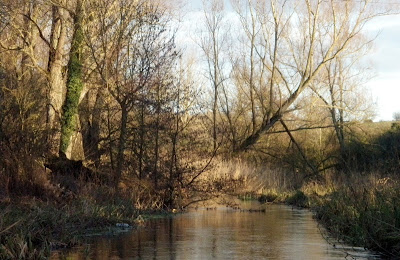 "A bit of bunny-hopping would have been useful." 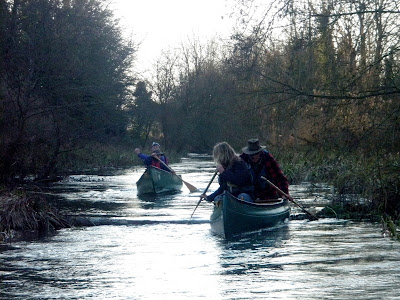 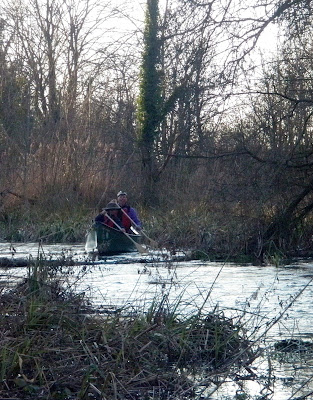 "This was all great fun!" 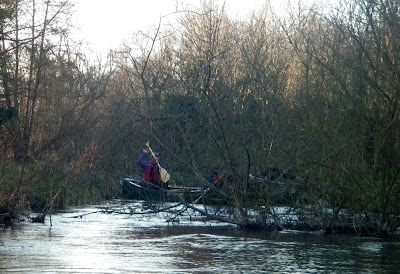 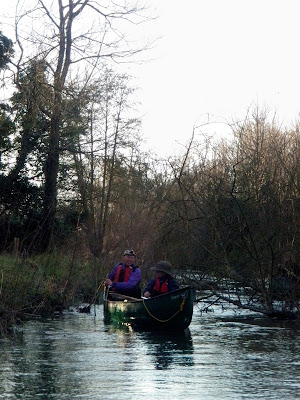 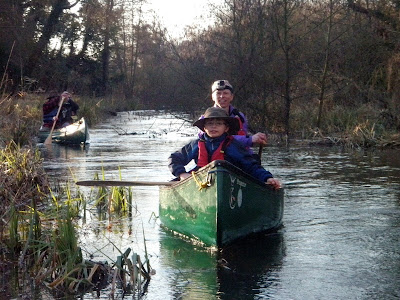 "The sunlight was softening towards evening, giving a lovely warmth to the woodlands we were passing through. Worryingly, much of the flow kept disappearing off through little sluices into the woods, and our stream was getting smaller." 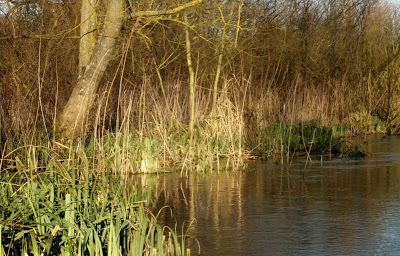 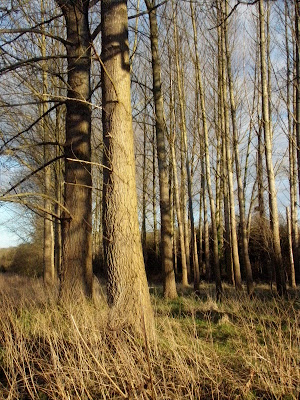 "Ahead, a wonderful old tree appeared." 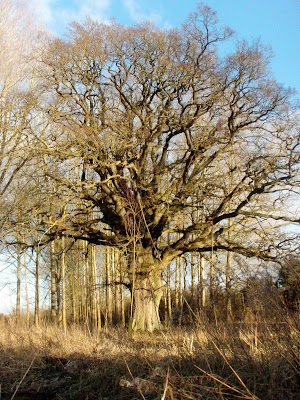 "And this marked the start of our difficulties. Here the river did a sharp left, then stopped. Well at first it appeared to, but then I saw a narrow gap in the bank and a right angled turn. Both were about 2 feet wide, we weren't getting down there. Out we all got." 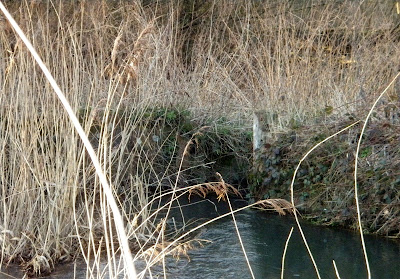 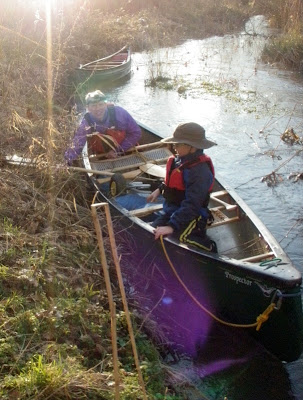 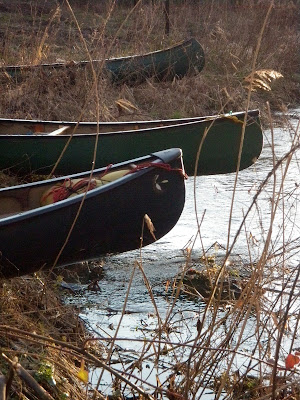 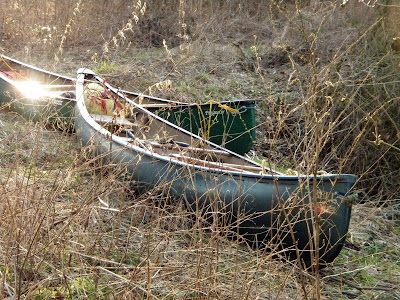 "We dragged over a muddy ditch, then managed to get in again. The river had widened once more, and battle recommenced." 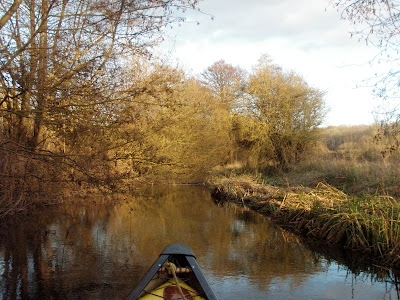 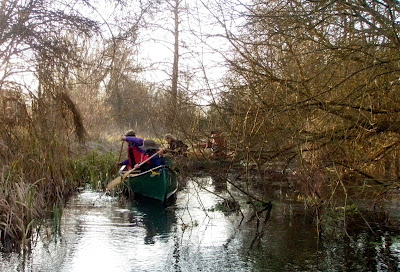 "Suddenly, a larger blockage appeared. It was clear this would involve getting out." 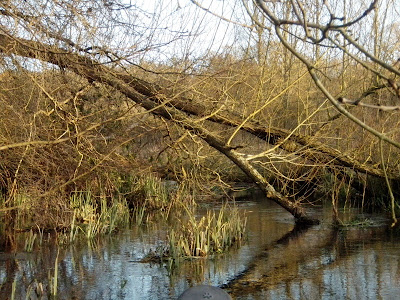 "We did, and Pete scouted ahead. His report was not good. The river was getting narrower and narrower, and more trees blocked the way." 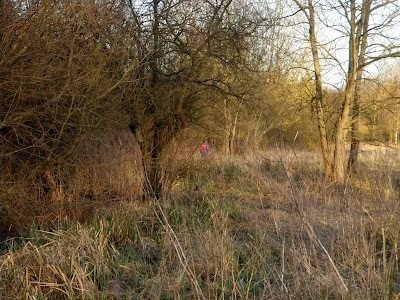 "We also realised it was about 20 minutes before sunset, so sadly decided to take the convenient escape route up to the canal at this point, putting in by one of the lovely arched bridges." 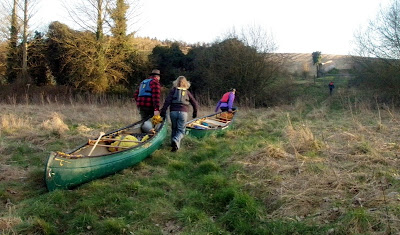 The route taken can be viewed on the PaddlePoints website here.
Posted by Atrebate at 19:21