Whilst looking at the websites referring to this blog this morning, I noticed that one of the URLs was from Barbel Fishing World (BFW).  Whilst following the direct link revealed a brick wall in the shape of a membership fee requirement for access to the specific reference, a little further browsing led to an interesting forum thread from last February, which serves as microcosm of the debate over access to the River Kennet for paddlers and the range of views held by anglers on this issue.

The thread, titled "Lower Benyons mass canoe invasion", began with a post that described how, on Friday 19.02.10 (the end of the half term holiday), "a group of 15 canoes/kayaks"*, identified as having been from Newbury's Adventure Dolphin organisation, "came over" Sulhamstead Weir and proceeded to navigate along the 940m loop that rejoins the canal just below Sulhamstead Lock.
*good to see the distinction being recognised ;-) 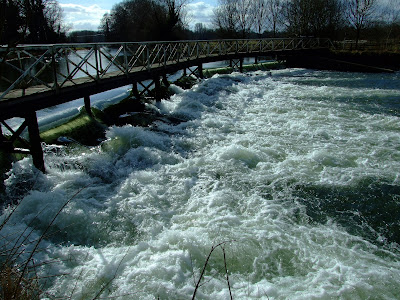 Sulhamstead Weir from the right bank of the riverine section at higher water levels (early March 2010).


Known to local anglers as the 'Lower Benyons' after the landowner from whom the Reading and District Anglers Association (RDAA) lease the fishing rights at this location, the thread continued with opinions expressed and questioning of the right of the paddlers to navigate this riverine section of the Kennet and, somewhat unusually, also just about managed to differentiate the issue of rights of access to the banks (for such as portaging the weir).
Comments ranged from the predictable 'humour' of "A length of piano wire at neck height maybe?" (complete with a smiley emoticon) to the more progressive opinion that stated "the simple fact is we [fishermen] need to get along with all water users".  Perhaps most notable
was the post stating that "they [the paddlers] [...] have a sound argument and we rely on outdated laws to keep them from 98% of our rivers", a point reinforced by the response that "The point is, they are not "our rivers", in most cases we simply lease the rights to fish, there is absolutely nothing in any leasing contracts I have seen which gives exclusive use of the water in question".

After several days in which the usual themes and arguments of exclusivity and 'ownship' were made and even rebutted as above, it was clear that the contributors were in no better a position to provide a definitive, objective statement of navigation rights for this section of the Kennet than anyone else to date (see the post describing British Waterway's view that the Environment Agency is responsible for navigation of the non-canalised Kennet here).


In lieu of a firm legal position being available at this time - and in opposition to the type of outdated, illogical and inflammatory rant offered by such as the Angling Trust in their "Pay Up or Shut Up" statement, or the evasive hedging offered by the British Canoe Union in their contribution to its members' concerns about recreational navigation rights - the following notes and thoughts on simple informal and mutually respectful consideration are offered for canoeing and kayaking on the Kennet at Sulhamstead and elsewhere on the river.
1. There is a recognised right of navigation and access along the Kennet Navigation (the canalised section of the River Kennet between Newbury and Reading).  A licence is required to paddle here and is available from British Waterways (please note that at the time of writing it is not known how the recently announced abolition of British Waterways may affect this position).  Alternatively, membership of the British Canoe Union covers this fee.


2. There is a public footpath across the bridge over Sulhamstead Weir that continues river left for about half way around the loop (see map image below).  The left bank is also a popular beat for RDAA and affiliated fishing clubs.  Note that in the broad section immediately below the weir and before the river bends to the right, the main channel is river left, and that the river right can be quite shallow in low water periods.  This is not an issue during better flows.  If you want to know if the 'Lower Benyons' beat is likely to be occupied during your passage you can check out the bookings here. 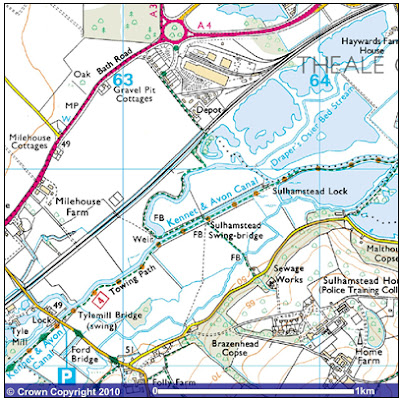 Sulhamstead Weir and the riverine loop of the Kennet.  Note the public footpath (marked by a green dashed line) that passes across the bridge above the weir and river left for the first half of this section.  [Image produced from Ordnance Survey's Get-a-map service. Image reproduced with permission of Ordnance Survey and Ordnance Survey of Northern Ireland.] 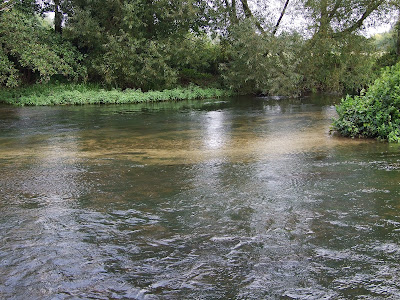 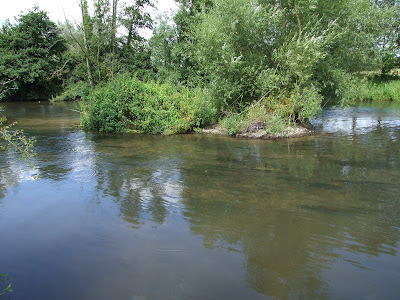 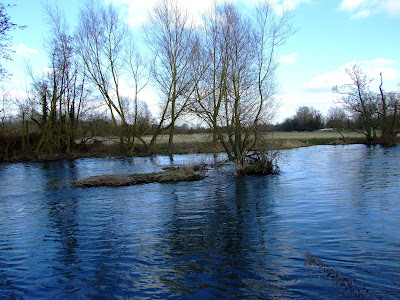 In higher flow rates there is plenty of depth to keep river right; the view looking back upstream from river left just below Sulhamstead Weir, early March 2010.

3. In describing the behaviour of the group from Adventure Dolphin, the original BFW poster on the thread referred to at the start of this post later commented that it was "mostly beyond reproach. [...] they offered to, and did, get out, carry their boats past me and re-launch just below...[...]. The few anglers below me, after being politely asked, allowed them to pass unchallenged. [...]...but they caused no visible damage."  Whilst portaging is by no means obligatory, such polite consideration might be welcomed.

The landowner, Richard Benyon MP, has previously stated in writing that "my family are riparian owners of a stretch of the Kennet. The angling is controlled and managed by Reading and District Anglers Association who seem to live quite comfortably with access to this stretch of this Kennet by river craft who use the Kennet, and the canal, at various points." 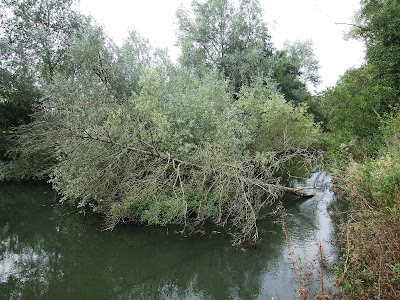 Portaging may also be required further along this section for reason of avoiding the strainers produced by the trees that seem to frequently fall into the river here.

Note: the author of this blog has no association with Adventure Dolphin or any of the fishing organisations referred to in this post.
Posted by Atrebate at 16:11