Spotting Otters on the River Kennet

The chances are that unless you're paddling either very early in the morning or latter in the day as the nights close in, you're not going to see one, and even then it's unlikely you'll have the pleasure, but there are definitely Otters on the River Kennet once again.  Nobody really knows exactly how many might be in residence on the river and surrounding watercourses, but the fact that a sighting is still newsworthy ensures a steady stream of reports from a variety of sources.

Historically, the Otter (lutra lutra) will have been present on the Kennet for around 10,000 years, having recolonised the British Isles after the last glacial retreat.  It was certainly prolific enough in the valley to make itself the target of persecution by human hunting until relatively recent times, with the ban on Otter hunting being somewhat irrelevantly and far too belatedly introduced in 1978, long after the use of organochlorine pesticides had decimated the population in much of the UK between the mid-1950's and a nadir in the late 1970's. 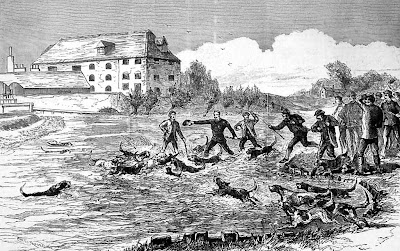 An image of an Otter Hound Hunt at Brimpton Mill on the River Kennet reported in an 1885 edition of the "The Illustrated Sporting and Dramatic News".  One of the reasons given for occasional absences from Ramsbury school in the 19th Century was "boys following the otter hounds on the river Kennet". [Source: http://history.wiltshire.gov.uk/community/getschool.php?id=962]
Having disappeared in the SE of England by the early 1970's, the 1980's saw the start of natural recovery in Otter numbers and a slow spread back across England.  With low level supported reintroduction by conservation societies -
"The Otter Trust released 117 captive-bred otters between 1983 and 1999, mostly on East Anglian rivers, but with some elsewhere. Their last release was of 17 otters on the upper Thames catchment over a six-month period in 1999.
The Vincent Wildlife Trust released a further 49 rehabilitated animals (i.e. orphaned and injured wild otters kept in captivity until fit for release) between 1990 and 1996, many of these as part of a release programme in Yorkshire." [Source: "Otters - The Facts"]

- a now almost totally natural population of, possibly, several thousand Otters, has established itself across the country, including along the River Kennet.

It's difficult to judge exact numbers along the Kennet because the secretive and often nocturnal habits of Otters combined with their wide terrritorial ranging make accurate assessment extremely difficult. In the Fourth Otter Survey of England 2000-2002 it was noted that "No sites in this LEAP* area were positive but there have been sporadic, but unconfirmed, reports of otters on the catchment since 1994." *[A LEAP being a Local Environment Agency Plan].  However, at some point between 2002 and 2010 there was a dramatic improvement of the situation.

The Fifth Otter Survey of England 2009-2019 reported that, from a position of no confirmed evidence from 1977 to 2002, Otters had returned to the Kennet Valley in the ensuing 7-8 years

The 2009-10 report continued that "Otters appear to have re-colonised the Kennet since the last survey and are now present on all the main rivers in the western part of the area. No otter signs were found in the downstream, eastern, part of the catchment so it is possible that they reached this area from the Bristol Avon catchment to the west or the Hampshire Avon to the South. There was a positive site on the Kennet and Avon Canal near Burbage very close to the watershed between the Kennet and Hampshire Avon catchments. However there has been otter activity on the Kennet for some years and previous sporadic evidence of otters on the Thames at Reading where the Kennet joins it (G. Scholey,
pers. comm.). It is possible that otters have moved up the Kennet through the town. The lack of evidence on the lower Kennet is surprising."

The position on the Lower Kennet also now appears to be changing.  In 2011 anglers were reporting sightings in the "Aldermaston area", "a little further downstream @ (LB)wigmore lane" (the riverine loop at Sulhamstead), "padworth stretch of TAA" (the section of river running down from Padworth Mill to the Padworth Lane road bridge), "the Hambridge area", "at Brimpton", and "nr thatcham".  With further such reports of Otter sightings on the Lower Kennet as recently as August this year, the good news continues.

As above, the quieter riverine sections of the Kennet would appear to be the best locations for potential sightings, but in lieu of this watch out for 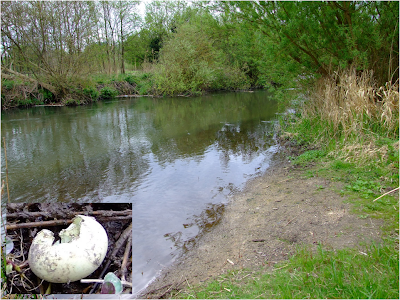 A typical location for finding signs of Otters on Kennet riverine backwaters.