Family friendly fun canoeing on the Kennet in Newbury

Under the title of "Deepest Berkshire's urban moving water" prolific local paddler Mal Grey (and by "prolific" I mean that, despite protestations that the boat rarely leaves his roof bars except when paddling, I still suspect he slings his Bell Prospector canoe up at nights not for storage, but for use as a hammock, just so that he doesn't waste sleeping time by not being able to at least dream of being out on a river) has described how the River Kennet can provide surprising opportunities for easily accessible paddling right under your nose.

The post on the Song of the Paddle forum blog describes a visit to friends in Newbury, who, faced with grey wet day, managed to pull an unexpectedly interesting and diverse short paddle out of the bag.  Some of Mal's pics of the day are interspersed with a few other photos which demonstrate that this route requires you to be there at the right levels, but that there is more to Newbury's waterways than just the canalised river and cuts.

"Pete & I inevitably ended up exploring SOTP and Paddle Points checking out his local streams.

We found what looked like an interesting short route, using a backwater of the Kennet, and the K & A navigation, to make a short circuit of just a few miles. We nipped down to the Northcroft Leisure centre grounds, and found a reasonable get in straight onto the Northcroft Stream.

I was surprised by the speed of the current, and actually briefly a little concerned, as it entered dense trees immediately, and I was the only experienced paddler here. I nipped back to the car for the saw, as Pete assured me the trees were brief...

Off we went. The current was strong enough that I could only paddle against it with an effort, but a quick reccy and I was happy we could get through. The day was very dark, so there are few photos, and those are fairly poor!

Out from the initial trees, the current slowed slightly." 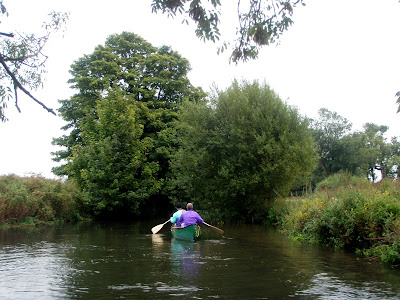 "We drifted downstream, and I played in the numerous eddies behind trees, whilst the lads investigated the branches of the said trees!

As we approached the town, more trees appeared, and the current got faster again. I spotted a low pipe ahead, so headed into the slower water on the left and got out to have a look. Yep, too low to definitely get under, and with fast water too, we weren't going to try! We climbed over on the left bank." 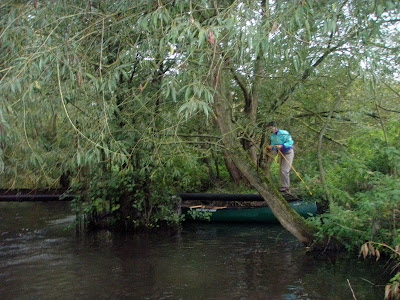 At this point it is possible to access Northcroft pay and display car park, the back of which is a short and easy walk through the trees behind the paddler.  This is also a convenient point to assess if there is enough water for paddling. 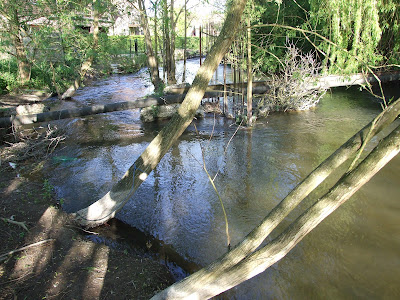 If there's more than a couple of meters distance between the left bank and the 'island' with the old fence railings, then there's probably sufficient water to paddle but too much to passage under the pipe in an open boat. 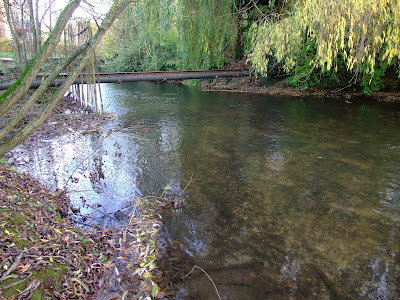 Once it gets this low, and the curving willow trunks are 'ashore', it's  too low to go.

"Beyond, the river swept quickly round a corner, blind enough and with a fast enough flow to make me think twice about just ploughing ahead, with thoughts of urban weirs or similar on my mind. It was easy to creep ahead in an eddy until I could see a clear route ahead leading to the end of the fastest bit, a pool below a weir from the canal. All of this was very easy, but the fact we didn't know what was ahead made it more interesting and almost adventurous!"

"Below here, a wider section is obviously used by the local club, and a few slalom gates hung above. I designated one of these, at random, as an upstream gate, and we all practiced our best Olympic C1 & C2 technique!" 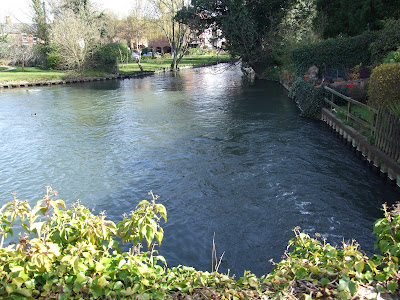 Northcroft Stream where it broadens at the outflow from the canal at Dolton Mews... 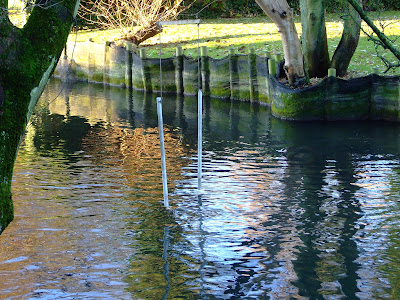 ...and just before it reaches the old slalom poles.

"And that was the end of our moving water adventure. A good half mile of it! A fun little bit, good to learn about currents and with enough eddies to play on. Still, the overhanging trees and pipe mean it isn't entirely without hazards."

The group then paddled downstream along the Kennet Navigation which starts from Newbury's Town Bridge, as far as Greenham Lock, and then back up to Newbury Lock, with more family members easily able to join the boats en route.  Following a short detour to explore the outflow route from the weir at the back of West Mills... 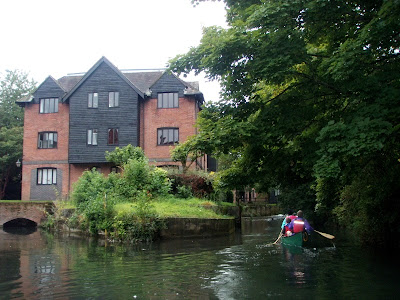 ...the paddlers portaged around Newbury Lock and continued up the Kennet and Avon Canal to the edge of the town where the riverine Kennet converges at the top of Northcroft recreation grounds.

"We turned back to the weir above Northcroft Stream, and portaged it easily. Apart from me dropping my paddle into the weir...

Now we just had a few hundred yards to go, once again on fairly fast current, in the gathering gloom." 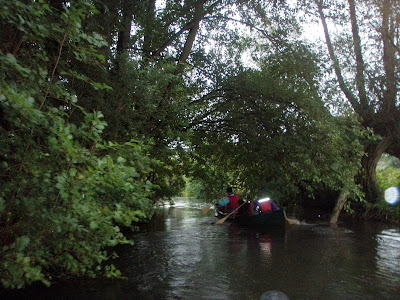 "The end of the circuit appeared beneath the bridge, and we all got out, somewhat soggy from the rain. 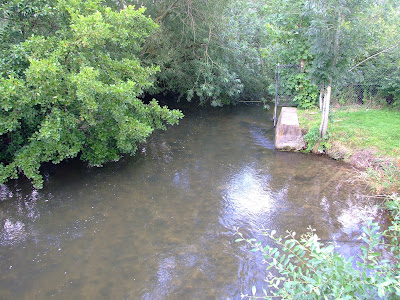 Mal's take out point was river right, just below the bridge (note the low trees here from the start of the account)... 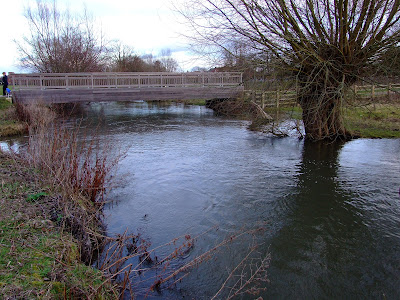 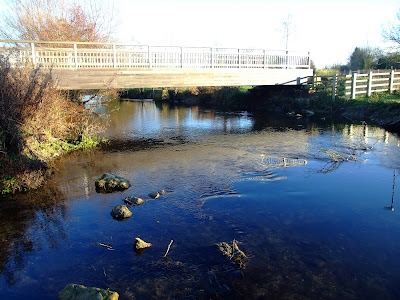 ...and lower levels in December 2010, indicating a potential scraped hull for the inconsiderate paddler.
Posted by Atrebate at 10:29