Last November, this blog reported on how Access to the River Kennet at Arrowhead Road had been lost to legitimate river users, an action possibly influenced by the litter left at that location by "a minority of the public".

Another stretch of the River Kennet is now suffering from similar ongoing seasonal abuse by a small but persistent anti-social element, which is affecting a section of a navigable riverine Kennet channel, principally over a length of approximately 350m, and up to a maximum recorded extent of about 800m.


The area in question is facing the following issues.
1.  General littering of the banks (which could be down to anyone), and some very specific angling related litter. 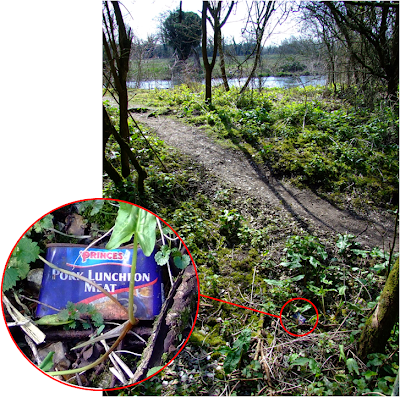 Luncheon meat (and a number of similar canned meat-based products) is a favourite bait for River Kennet Barbel anglers, but hey, one discarded 'tin' spotted yesterday doesn't constitute a substantial disregard for the environment... 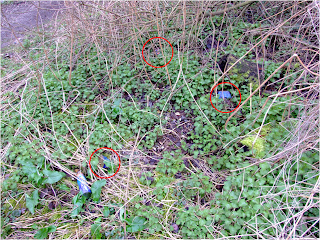 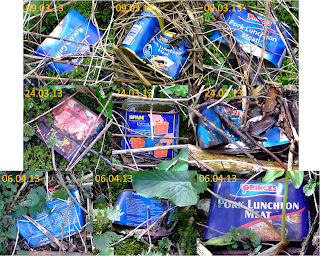 ....or we could consider a selection of photographs from the last month.  It may be that I've seen the same rubbish before, so I've only added a small selection here.  Over the summer the undergrowth behind the access footpath will disguise previously uncleared rubbish.

The length of time some of this rubbish has been left undisturbed and the process of slow decay is attested by these images from today.

You might think that the colour of some discarded angling equipment might help hide it from ready view, and 'excuse' those responsible for cleaning up for not having spotted it
(assuming that those people who dumped it the first place couldn't have taken it away)... 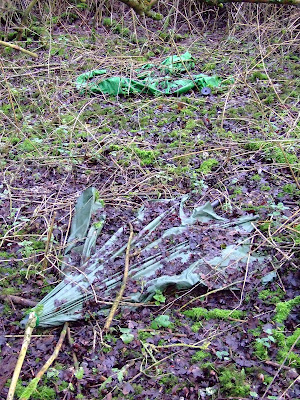 ...but when the undergrowth dies back you may come across the fishing umbrella equivalent to an  uncleared elephant graveyard. 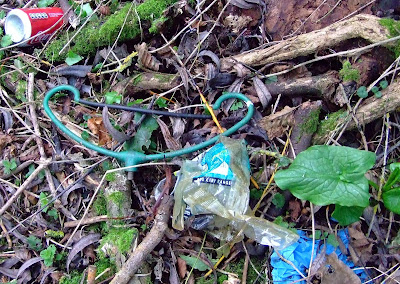 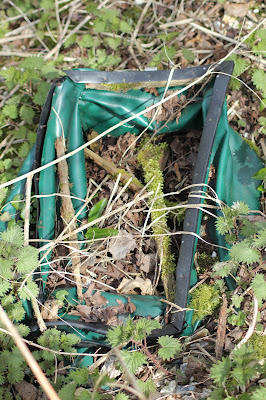 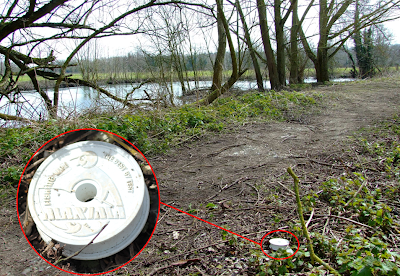 Some of the angling litter at this location is less easy to miss; this reel lying by the side of the public footpath today was not exactly hard to spot... 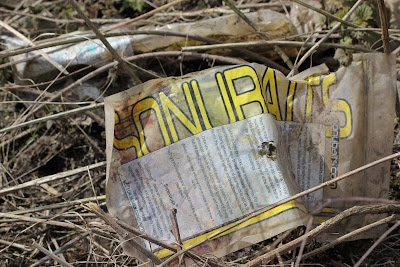 ...and neither was this large plastic bag left beside the river.  It's a shame that the Angling Trust haven't been more rigorous in promoting their Tidy Angler project (funded by the Environment Agency, which therefore means the taxpayer is paying for a scheme that doesn't appear to be having much effect at this location). 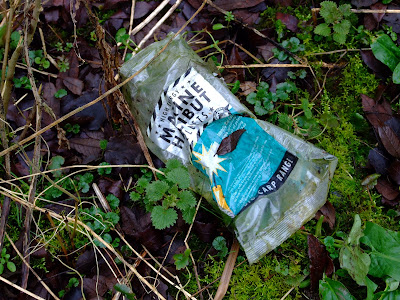 Some of the angling rubbish at this site has obviously blown in from fishing lakes behind the river where anglers seek different prey, but it's a good place to escape from immediate view, which leads to point no. 2...
2. Human excrement. 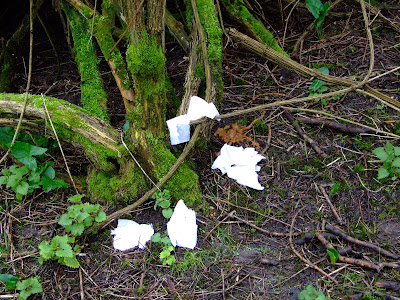 Unfortunately, this is not the only example of anglers being 'caught short' on this section of the Kennet (their foresight in bringing toilet paper might be more commendable had they also thought of bringing a trowel or a bucket and bin bag too) but I think one photo is enough.  Those who may shortly be cleaning up this area might want to adopt appropriate health care precautions.
3. Now we come to a problem that affects all waterways, and which is an issue affecting both wildlife and paddlers when it comes to this section of the River Kennet.  Discarded and abandoned fishing tackle. 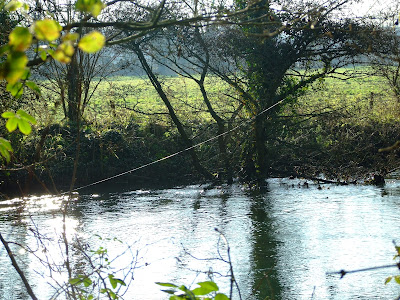 It's often really hard to see fishing line when paddling, but whilst this section of the River Kennet is only legally fished from the north bank (and therefore the fishing rights may only extend to half way across the river) that doesn't mean you won't face the possibility of snagging at any point along either side of this riverine section. 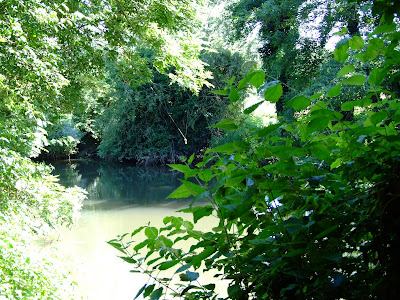 Most decent anglers will try to remove snagged lines (look closely at the center of this picture; so far as I'm aware the angler whose rod was still attached to this line removed it before departing)... 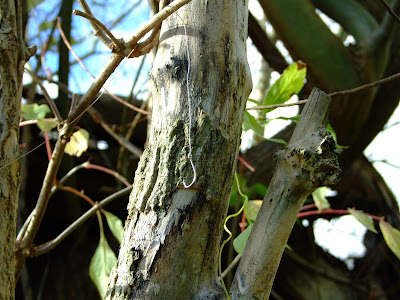 ...but this section of the River Kennet seems to suffer from a surfeit of either myopic or vicariously thoughtless and careless anglers (this picture was taken in November 2012: it shows a fishing hook and length of fishing line at head height which was removed by a paddler from a clearly visible angling bankside location along the section of concern).  Once again, the principals of the AT's Tidy Angler project don't seem to have made much of an impression here. 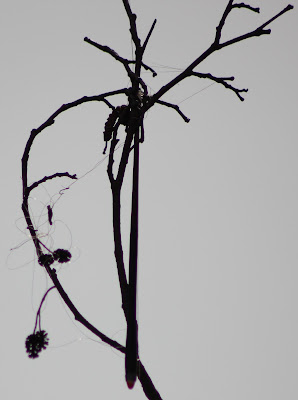 More line with hook and float from today; if you think this looks fairly harmless... 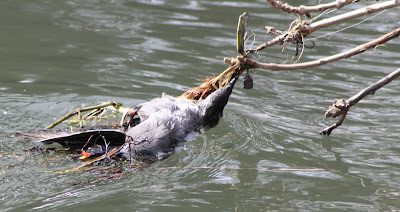 ...it's also difficult for wildlife to spot discarded fishing line as a snag hazard.  The victim in this picture, taken today, was a moorhen.
4.  We now come to a little recognised hazard which may be particularly relevant along this section of the River Kennet.  Underwater snagging.  The type of line and hooks shown in the pictures above are no less dangerous to wildlife when underwater. 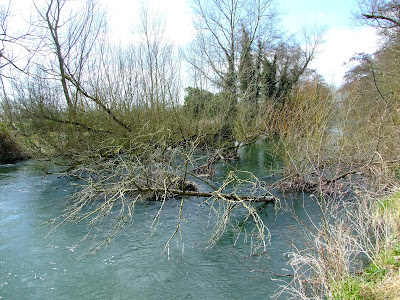 This tree fall has remained in place for a long time during which time it has become a favoured spot for local anglers.  However, there is a risk that it has gained a considerable underwater collection of lost line and hooks.

The words of a concerned angler best describe this issue: "Fishing to snags can be VERY productive BUT it has a shocking downside that as anglers we rarely see. I am talking about tethered fish.

Through my work within fishery management I have been involved in many snag removal projects and they are always unpopular with the anglers fishing the venue at the time. They change the appearance of the fishery and they will change the behaviour of the fish. However in the last twenty or so years I have rescued a number of tethered fish during such operations and also removed miles of line, bucketfuls of leads and of course many rigs. Sadly I have also found fish that have been tethered that have not survived."

It is the responsibility of riparian landowners (or their delegated authority) to ensure that water can flow through their land without any obstruction.  It is also a responsibility to "clear any litter and animal carcasses from the channel and banks, even if it did not come from your land."

This particular hazard can be negotiated with care by paddlers in normal flows, even when residual growth and accumulated summer foliage appears to present a curtain against downstream view.  The complaint of an angler of this section of the Kennet that this blog contains "photos of some favourite swims being cleared for passage" presumably refers to this picture from 2011: 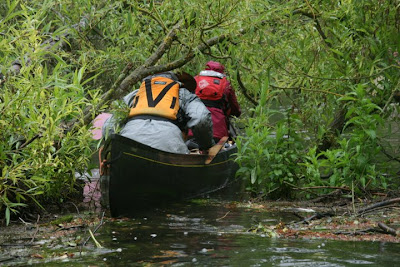 This is the same location as pictured in the preceding image.  The paddlers are not removing the branches in this instance, but canoeists are uniquely able to assist in clearance of river debris.  Unfortunately, and as the above quote indicates, there are those who would rather see such blockages remain in place.

Elsewhere on this stretch of the Kennet banks have been cleared to provide ease of angling access and reduce the chance of snagging, but in the following examples (pictures taken of a spot opened up to provide an additional point from which to cast a line just below the previously pictured tree falls) care for the environment does not appear to have been the priority. 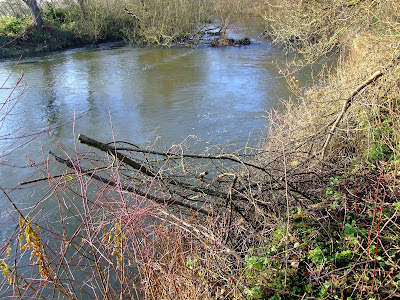 Branches cut to avoid snagging would be better properly removed... 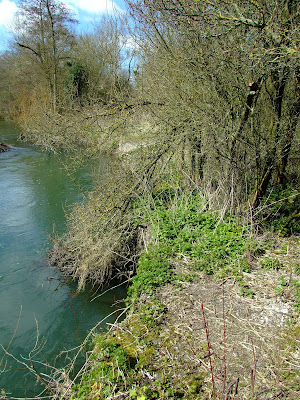 ...no, lesson not learned.
This particular point does not assist paddlers wishing to portage here because the bank is too high.  However, there are numerous other places along the course of this channel where the banks and vegetation have been previously cleared for angling access, and which might serve for access or egress where the public footpath runs alongside the north bank (river left), or, further along the loop, in emergency need. 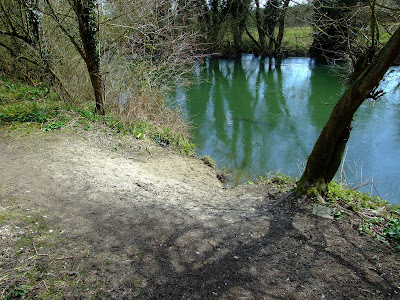 Where bankside clearance has already been made, access/egress for paddlers is often ideal if the location is not otherwise occupied and where it provides access to legal rights of way; a vacant peg on the River Kennet yesterday.

Just in case you haven't worked it out by now, this section of the River Kennet (and from where all of the pictures above have been taken, although there are many more from other locations along this river) is the Sulhamstead loop which runs for about 900m from Sulhamstead weir to the point where it rejoins the canal cut below Sulhamstead Lock.

The fishing rights here are exclusively leased by the Reading and District Angling Association (RDAA).  The President of the RDAA is Martin Salter, who is also the National Campaigns Co-ordinator of the Angling Trust.  RDAA call this beat the "Lower Benyons" in deference to the owners of the estate which leases them the fishing rights here, a family of which Parliamentary Under-Secretary for Natural Environment, Water and Rural Affairs Richard Benyon MP (his ministerial portfolio includes inland waterways) is a member.

It should be emphasised that the vast majority of anglers care deeply about our rivers, and have a great deal of knowledge to share with all those who feel the same way.  There is great opportunity for all river users to work together for the benefit of the environment. The minority who are not willing to accept their responsibilities have no place by our waterways, and those who seek to use environmental arguments to exclude canoeists and kayakers from English and Welsh rivers might first wish to put their own house in order.
Posted by Atrebate at 18:23


Apologies for some of the spacing between the text, photos and captions. I just gave up on trying to reconcile the difference between the supposed WYSIWYG edit mode and a published post.